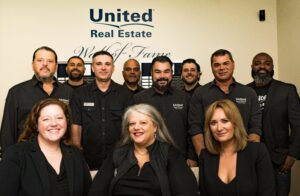 Three brokerage owners and/or partners in New Jersey all have unique tales to tell about how they’ve evolved and grown their businesses, but all are in agreement on one crucial point, which is that partnering with United Real Estate was easily the best decision they’ve ever made.

Success stories are the norm for United, now one of the Top 10 brokerages in America after only 11 years in business. Led by CEO Dan Duffy and President Rick Haase, the Dallas-based company considers itself to be the modern alternative to old-school real estate brokerages. That’s precisely what the New Jersey brokerage leaders were looking for.

Jeff Bailey, COO and owner of United Real Estate | North Jersey, decided back in 2015 that in order to grow his small real estate firm, he needed to partner with a major player.

“There was nothing like United in New Jersey at the time,” he says. “We were first to bring it to market, and that was really exciting for us. I flew to Dallas and met Dan Duffy. I grasped that they offered outside-the-box thinking. It was really brilliant. The whole United leadership team was and is tremendous.”

Once aligned with United, Bailey and his local team expanded from a single office to become a multi-office regional company serving New Jersey and, most recently, New York’s Hudson Valley.

“What we did was secure a large territory when we first joined United, thinking expansion was going to be key, and people have come to our territory to open United offices and partner with us,” he explains. “With United’s support and guidance, we were able to forge partnerships to grow our company exponentially.”

United Real Estate has enticed brokerages it has brought aboard with a financial philosophy agents want to hear today.

“Most all franchising systems today charge their brokers an amount of money that is a multiplier of the gross commission income,” says Haase. “And when they do that, it’s good for their bottom line, but it doesn’t leave enough top-line revenue to pay agents what they want, need and deserve to stay with the company. Further, older franchising systems typically don’t provide enough services, tools and localized support, causing owners to spend more – and that injures the economics of their business.

Bailey points out that United | North Jersey has had former agents express interest in an ownership position and made that happen via partnerships. “We don’t just sell franchises in our territory, we partner up and leverage synergies,” he says.

One such person is Justin Phillips, who desired to move from independent broker to aligning with a strong national partner. After doing research, which included meetings with Duffy, Haase and Bailey, he signed on, and is now principal broker at United Real Estate | Hudson Valley Edge.

“In order to grow and scale my real estate brokerage, it was necessary to align with a national partner who would be able to offer my agents more money while providing cutting-edge marketing, technology and office management solutions,” he says.

“United Real Estate is by far leading the pack in comparison to other real estate companies I evaluated. The transactional or fee-based real estate model paying nearly 100% commission to an agent is the new way. Formerly, I was a recruiter and manager of another well-known national company where it was difficult to recruit new agents into an antiquated compensation and operating model. The company relied heavily on high broker splits with agents, franchise fees and high overhead to run and maintain its traditional real estate offices.”

Phillips cites the partnership with United North Jersey as being crucial to increasing his value proposition to recruits, noting that their extensive knowledge of the United system and being able to add hundreds of agents during the pandemic made it clear there was a winning formula.

“As new agents are joining United Real Estate | Hudson Valley Edge, they are welcomed by an established system already in place, from onboarding to administrative and managerial support to training systems, so they do not lose much time during the transition.”

Regarding what advice he would have for other entrepreneurs who want to grow their offices, Phillips was clear and concise.

“Keep an open mind and evaluate all options,” he says. “Look at the financial strength of the company and their offerings to an agent. Ask yourself, ‘are they an agent-centric company or are they focused on a top-down (broker-first) mentality?’ After finding United Real Estate and realizing they focus on the agent and long-term growth, I knew I had made the right decision.”

Switching to United Pays Off

So too did Marion Douglass, one of Bailey’s partners who was formerly affiliated with a different national franchise in Rutherford, New Jersey, for two decades. She’s now a partner in United | North Jersey’s Rutherford office.

“When my former company went public, there were many changes from leadership on down,” she says. “United offers more of what we want and need, especially the user-friendly technology for our agents.

“The real estate market is changing, and brokerages need to change, too. I’m excited to bring our 20 years of real estate experience to our new adventure, becoming partners with United | North Jersey.”

Douglass also extols the compensation structure at United, understanding that the more money agents can make, the more loyal they will be.

“The commission structure is outstanding at United, offering 100% commission splits and charging agents just a small fee for each closed transaction,” she explains, “so more dollars go into an agent’s pocket without cutting back on service to the clients.

“When we opened our office, we set out to create a good work environment for agents. And now this is what we’re striving for here. We feel that we can offer the best all-around service to our agents—which, in turn, gives our clients the best service, too.”

So, what’s next for United’s success story in New Jersey? For United | North Jersey’s Bailey, the next stage for growth is mergers and acquisitions, with United’s support.

“That’s the next phase of what we want to do,” he says firmly. “We’re working with the home office and leadership team and have a few irons in the fire right now, like bringing in a 100- to 200-agent office in one fell swoop.”

NOTE: This website is not a franchise offering. A franchise offering can be made by us only in a state if we are first registered, filed, excluded, exempted or otherwise qualified to offer franchises in that state, and only if we provide you with an appropriate franchise disclosure document. Follow-up or individualized responses to you that involve either effecting or attempting to effect the sale of a franchise will be made only if we are first in compliance with state registration or notice filing requirements, or are covered by an applicable state exclusion or exemption.

The following states regulate the offer and sale of franchises: California, Florida, Hawaii, Illinois, Indiana, Kentucky, Maryland, Michigan, Minnesota, Nebraska, New York, North Dakota, Rhode Island, South Dakota, Texas, Utah, Virginia, Washington andWisconsin. If you reside, plan to operate or will communicate about the franchise in one of these states, you may have certain rights under applicable franchise laws or regulations.